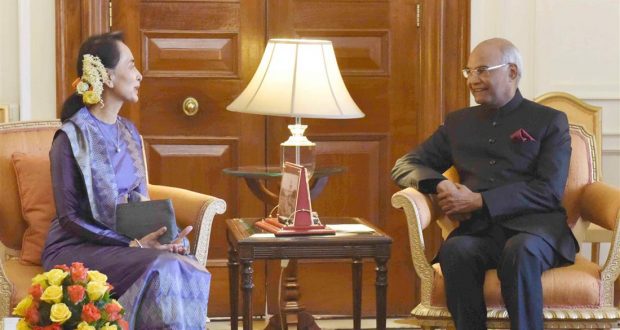 in National January 27, 2018 Comments Off on State Counsellor of Myanmar Calls On President Kovind 715 Views

During the conversation, the President said that we are honoured by Daw Aung San Suu Kyi’s presence at our Republic Day and the ASEAN-India Commemorative Summit. The President stated that India had a longstanding relationship with her and her family.  And Rashtrapati Bhavan and the Mughal Gardens also have a special connection with her. The President presented her bush roses from the Long Garden of Rashtrapati Bhavan.

The President said that Myanmar occupies the highest priority for India under its ‘Neighbourhood First’ and ‘Act East’ policies.  He assured India’s continued support to the Government of Myanmar in its peace process, and efforts towards national reconciliation and economic and social development.

The President said the India-Myanmar relationship will get a boost if we ensure that our strong political and cultural bonds are supported by commerce. Bilateral trade of just over US $ 2 billion is not reflective of our close ties.  There is immense scope for cooperation in sectors such as power, renewable energy, hydrocarbons and health.