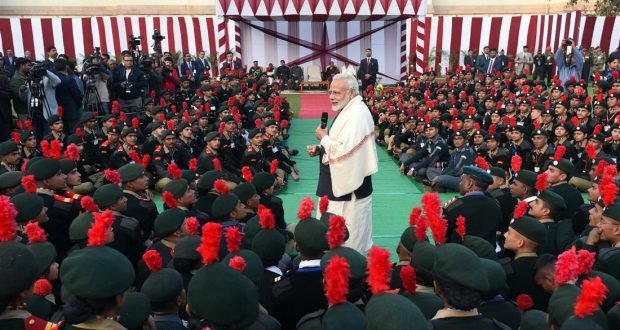 Walking among the group of NCC Cadets assembled at Teen Murti lawns, he spoke of the diversity of India. He said that there is a lot to learn from one another. He emphasized that it is important to embrace changes happening around us. The youth of India can bring transformative changes in the nation, he asserted.

The Prime Minister said that the nation is immensely proud of our Armed Forces. In that spirit, he added, we should seek to know more about the brave individuals who are serving the nation.

Shri Narendra Modi said that there are several police personnel who have given their lives for our nation, and it is important to know about their sacrifices.

The Prime Minister mentioned the importance of cleanliness. It is our duty to fulfil Mahatma Gandhi’s dream of a Swachh Bharat, he said.

The Prime Minister said that this Republic Day was special, because leaders of 10 nations joined us for the celebrations.