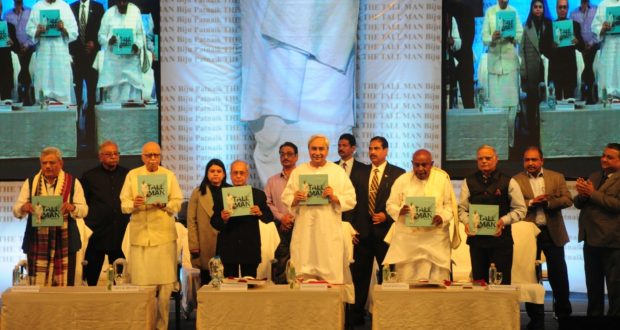 in State News January 27, 2018 Comments Off on Pictorial biography ‘The Tall Man Biju Patnaik’ of legendary political leader was unveiled by former President of India 972 Views

The pictorial biography of the legendary statesman which was contributed by the Biju Patnaik Centenary Committee encapsulates rare photographs of Biju Babu’s life and is written by noted writer Sundar Ganesan.

Speaking on the occasion, Biju Babu’s son and Odisha Chief Minister Naveen Patnaik said, “In my view Biju Babu is an idea and continuity, an idea to realize human aspirations, an idea of Odisha’s self esteem, selfless service and empowerment. An idea that was much ahead of his time that will live forever and continue to inspire generations to come.”

“To capture the tall man in 186 pages is nearly impossible. Thank you Mr Sundar. You have done a great Job and thank you Future Books for making the taller man available across the globe through Amazon and Flipkart”, he said.

“The book is a commemoration and tribute to Biju Babu. I am sure the book have touched the tall man itself”, Naveen added.