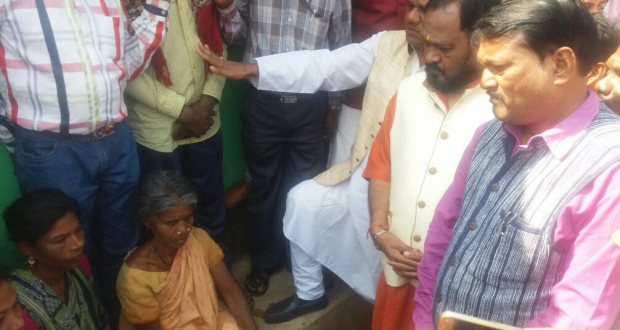 in District Diary January 25, 2018 Comments Off on High-level delegation of Odisha BJP met the family of the Kunduli gang rape victim 1,014 Views

Koraput:25/1/18;  High-level delegation of Odisha BJP headed by its State president Basant Panda met the family of the Kunduli gang rape victim, who ended her life on January 22, at her village in Koraput, its women wing members took out a funeral rally in Odisha capital protesting against the suicide citing failure of the State Government in providing justice to the minor girl.

Hundreds of women activists led by State Mahila Morcha President Prabhati Parida took out the rally, carrying a symbolic cadaver of kunduli gang rape victim and raising slogans against the State Government, from the party office to the Mahatma Gandhi road in the state capital.

The BJP Mahila Morcha also announced to take out protest rallies in 1000 Mandals across the State in next 11 days to press their demand for a CBI probe in the case.

2018-01-25
Editor in chief
Previous: 44 personnel of the Odisha Police will be awarded with medals in different categories
Next: Padma Awards 2018 announced