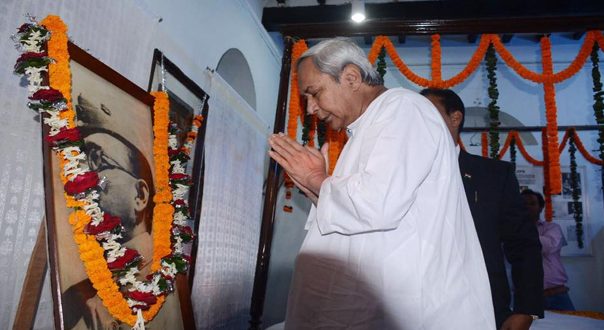 Chief Minister Naveen Patnaik offered floral tribute to Netaji at his statue in Cuttack, where he was born, this morning.

“My heartfelt tribute and salutations to the great freedom fighter, exemplary patriot and son of Odisha, #Netaji Subhas Chandra Bose on his birth anniversary. His undying love for the motherland and courage and sacrifice for country’s freedom continues to guide us in Nation-building,” Patnaik said in his twitter post.

Patnaik also said that the dedication of Veer Surendra Sai towards freedom struggle and protection of tribal interests will inspire the state.

Union Petroleum Minister Dharmendra Pradhan paid his tributes to the freedom fighters. “I salute Netaji Subhas Chandra Bose on his birth anniversary. Netaji was an icon of our freedom struggle, his valour and sacrifice is an inspiration for all of us,” Pradhan said.

“My homage to the great revolutionary and freedom fighter Veer Surender Sai on his Birth anniversary,” Pradhan said.

Several functions were held, including by the state government to celebrate the birth anniversaries of the two nationalist leaders.

Netaji was born in Cuttack on this day in 1897 and Surendra Sai at Khinda village in Sambalpur in 1809.

2018-01-23
Editor in chief
Previous: Opposition parties rose in protest across the state as Kunduli gang-rape victim to commit suicide
Next: Bijepur Assembly bypoll will be held on February 24