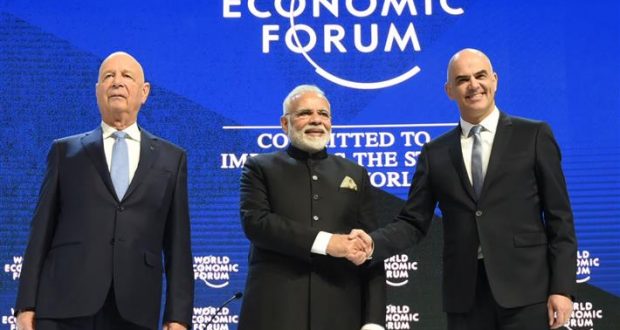 Switzerland:23/1/18:Prime Minister Narendra Modi today addressed the opening keynote address at the plenary session of the 48th World Economic Forum (WEF) at Davos in Switzerland.Listing three issues – terrorism, climate change and protectionism- as the three challenges for human civilisation, PM Modi started his speech by recalling the last time an Indian prime minister attended the WEF summit which was in 1997,Speaking on a wide range of topics such as Google, Harry Potter, the currency Euro, Brexit, and Asian financial crisis he focused as to how far the world has come in the last two decades.

PM Modi expressed concern over the melting of Arctic glaciers and projected India’s actions towards mitigating climate change by saying that the country has targeted to produce 175 gigawatts of renewable energy by 2022 of which one-third of the target has already been met.

He said that terrorism is dangerous adding that it is worse when people mention a difference between good and bad terror. The PM stated it is painful to watch youngsters getting radicalised.

Elaborating his views on the same, he said protectionism has overtaken globalisation which has affected cross-border commerce and global supply chains.

Earlier in the day, the Prime Minister told top CEOs that India means business and spoke on opportunities for global businesses. He even went on to mention India’s GDP swelled six times from $400 billion in 1997.

.
2018-01-23
Editor in chief
Previous: Basant Panchami is being celebrated with much fervour in all educational institutions across the State
Next: Opposition parties rose in protest across the state as Kunduli gang-rape victim to commit suicide