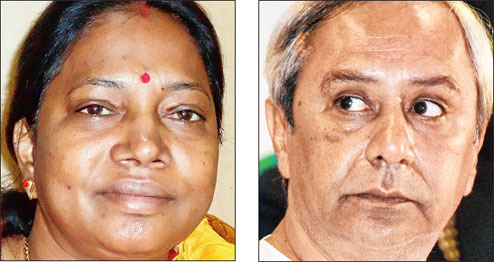 in Politics January 21, 2018 Comments Off on Pramila Mallick submitted her report to Naveen Patnaik on allegations against Kendrapada MP Baijayant Panda 969 Views

Bhubaneswar:21/1/18; BJD Kendrapada district observer Pramila Mallick, who had been asked by party supremo and Chief Minister Naveen Patnaik to inquire into the allegations against Kendrapada MP Baijayant Panda, submitted her report to Patnaik at the Naveen Niwas on Saturday evening.

After meeting Naveen, Mallick told reporters that she submitted her report after holding discussions with party workers and functionaries and people of the constituency. While some of them spoke against the MP, others also spoke in his favour. She said she has given an impartial report.

Earlier in the day, Mallick had said that she had spoken to Panda over the telephone and asked him about all the necessary matters. The MP asked her to give him in writing about all the accusations. But due to time constraints it is not possible to do so she had said.

She had also gone to Kendrapada and spoken to the party workers, who have been repeatedly alleging that the MPLAD funds were not properly utilised by the MP or he is not taking the party workers and the local MLAs into confidence while sanctioning projects.