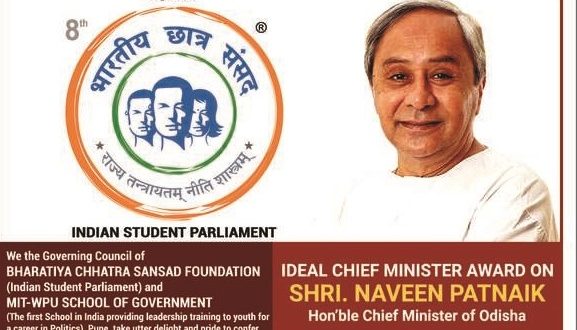 in National January 18, 2018 Comments Off on Odisha chief minister Naveen Patnaik will conferred as an Ideal Chief Minister by Bharatiya Chhatra Sansad 798 Views

Bhubaneswar, Januaty,18/1/18: After  An award from INDIA TODAY  a news magazine in New Delhi to Odisha chief minister Naveen Patnaik as the “Best administrator” in the country  another award  as an Ideal Chief Minister is bestowed on Naveen Patnaik by Bharatiya Chhatra Sansad at MITWPU campus,Pune onJanuary .21,2018 at 2.30pm,The awrd will be given by Mrs Prativadevisingh Patil, Former President Republic of India  and Governing Council of Bharatiya Chhatra Sansad

Bharatiya Chhatra Sansad or BCS, as it known, is a non-political platform to sensitize and harness the power of youth, ignite the very spirit of student politics in the youth of today and inculcate public spirited and socially sensitive values right during their formative years. BCS aim to raise the extent of sensitivity, awareness, involvement, responsiveness, access and say of youth in political and democratic processes so that a healthy democratic system is evolved to produce competent public leaders and policy makers, from the grassroots and from all walks of life

5th edition of the BRAP Assessment Report : Odisha Among 6 States On Achievers’ List