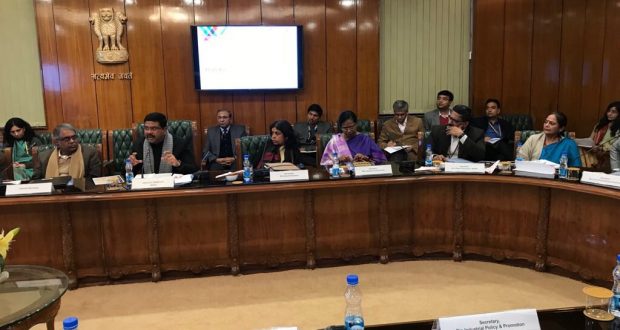 in National January 18, 2018 Comments Off on Ministry of Petroleum and Natural Gas launched Bid Round I under the innovative Open Acreage Licensing Programme 695 Views

Newdelhi:18/1/18;With the objective to achieve Prime Minister’s vision for Energy Security and Sufficiency, the Ministry of Petroleum and Natural Gas (MoPNG) has steered a plethora of reforms in the recent past years. Aligned with the objective, the Government launched the Bid Round I under Open Acreage Licensing (OAL) Programme for international competitive bidding on 18 January, 2018.

For the first time in India, 55 bidder selected blocks, each carved out by prospective bidders themselves in promising basins with an area of 59,282 Sq. Kms were announced for bidding. This is the largest offering of acreages; the Government has announced in the past 8 years.

During the event, he launched the e bidding portal and the Notice Inviting Offer (NIO). The ebidding portal is a fully safe, secured and transparent ebidding platform wherein the bidders can submit their bids from anywhere in the world. In parallel, ‘DGH OneTouch’ mobile application was also launched which would act as a one stop solution for accessing information about DGH, policy initiatives and other relevant information on the move.

Thereafter, he delivered a stimulating Keynote address, highlighting the increasingly growing positive industry sentiments and signs of steadfast progression of India’s O&G sector. He mentioned the scale of proactive reforms being enacted at MoPNG major ones being: Introduction of Hydrocarbon Exploration and Licensing Policy (HELP), Discovered Small Field (DSF), National Data Repository (NDR), Hydrocarbon Resource Reassessment study. He mentioned that the reassessment study undertaken for the first time in two decades has indicated a significant increase (~50%) in resource estimation. Also, he shared his thoughts on future endeavors of further strengthening the E&P ecosystem by reforms focused on boosting the indigenous production of oil and gas by infusion of world class technology and collaboration with global oil and gas companies. Shri. Dharmendra Pradhan also took time and briefed the media to share the advances and future strategies in the Indian E&P sector.

Secretary, Ministry of Petroleum and Natural Gas Shri. K.D. Tripathi set the context for the occasion by delivering a talk on an overall outlook of the Indian E&P sector.

DG, DGH Shri Atanu Chakraborty, delivered a detailed Presentation on Indian E&P Opportunities, showcasing the array of investment prospects in the sub surface of Indian sedimentary basins. He shared a glimpse of progressive Indian Economy with a focus on the upstream sector and also briefly touched upon, how India is set for high and sustained growth in energy demand, in years to come. Aside to this, he also showcased the spread of EOIs received across the diversified regions in Indian territories.

2018-01-18
Editor in chief
Previous: Home guards staging Dharna at the Lower PMG square demanding fulfilment of their seven-point charter
Next: Announcement of Schedule for the General Elections to the Legislative Assemblies of Meghalaya, Nagaland and Tripura, 2018.