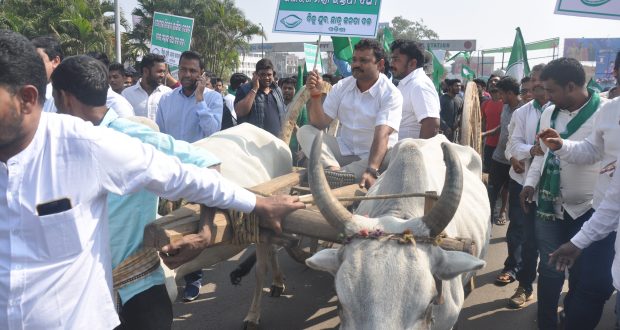 BJD took out a bullock cart rally in protest against rising petrol and diesel prices.

in State News January 18, 2018 Comments Off on BJD took out a bullock cart rally in protest against rising petrol and diesel prices. 839 Views

Bhubaneswar:18/1/18: The BJD took out a bullock cart rally here today in protest against rising petrol and diesel prices.

The party accused the BJP of “betraying” the people by not fulfilling the promises it had made before elections.

They accused that the Union Minister has failed to check the price hike of petrol and diesel and demanded his resignation.

The protesters claimed that price of essential commodities is skyrocketing due to the increase in oil price.

“The NDA government has increased price of petrol and diesel nine times since it came to power in 2014 which has affected the common people of the country, said former Odisha Food and Supply Minister Sanjay Das Burma.

If the BJP-led Union government does not take any step to check oil price soon, we will intensify our agitation,” threatened Das Burma.

2018-01-18
Editor in chief
Previous: Union Minister of State for Law and Justice & Corporate Affairs, was conferred the Honorary Fellowship of ICSI
Next: Ollywood actor Sabyasachi stress on the need for Women Equality and Equal Opportunity for the Girl Child