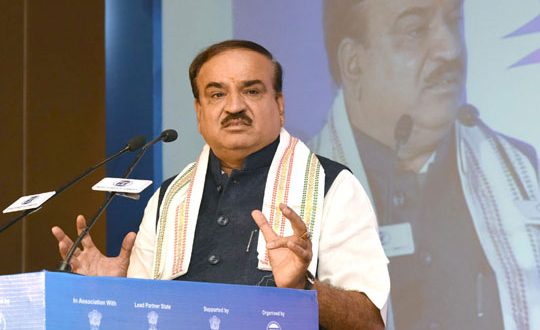 in National January 16, 2018 Comments Off on 7th edition of ‘Rashtriya Sanskriti Mahotsav-2018’ inaugurated in Karnataka 950 Views

Bangaluru:15/1/18;The 7th edition of ‘Rashtriya Sanskriti Mahotsav-2018’ was inaugurated at Bangaluru, Karnataka on 14thJanuary 2018. The Union Minister for Chemicals and Fertilisers and Parliamentary Affairs, Shri Ananth Kumar and The Union Minister of State for Culture (I/C) and Environment, Dr. Mahesh Sharma was inaugurated the Mahotsav at the Jnana Jyothi Auditorium, Palace Road, Gandhi Nagar, Bengaluru.

While addressing the inaugural function Shri Annath Kumar thanked Ministry of Culture for bringing prestigious Rashtriya Sansktriti Mahotsav in Karnataka again and celebrating the same through the spirit of ‘Ek Bharat Shreshtha Bharat’. He also  appreciated the efforts of the Ministry of Culture for organising Rashtriya Sanskriti Mahotsav. He further added that there is unity in diversity in our country and it is the Culture which binds all of them together. He also mentioned that organizing such a unique cultural event gives people from different regions a chance to showcase their talent, artworks and delicacies at one platform. Ministry of Culture plays a very important role in preserving our rich cultural heritage and in uniting our country.

Addressing on the occasion, Dr Mahesh Sharma said, “We are delighted to bring to you our beloved and Hon’ble PM shri Narendra Modi’s vision of Strong and united India with respect and appreciation of multicultural and respect for each other’s rich cultural heritage exemplified by Ek Bharat Shreshtha Bharat programme through Rashtriya Sanskriti Mahotsav 2018, a cultural festival that will powerfully revive India’s heritage, like never before. The event brought together the art, artisans, dance, handicrafts, flavours and music from different regions, making itself the largest ensemble of Indian culture. While this event introduced and connected country’s youth to the various facets of our rich and vibrant culture, it also gave people from different regions a chance to showcase their talent, artworks and delicacies at a larger-than-life podium”.

As a part of Rashtriya Sansktriti Mahotsav Dr Mahesh Sharma also inaugurated an exhibition at National Gallary of Modern Art, Bangluru on Nicholas Roerich, a Russian artist, writer, theosophist and archaeologist who lived and died in the Himalayas.

2018-01-16
Editor in chief
Previous: Odissi dancers from the overseas took part in the 57th edition of Ekamra heritage walk
Next: ‘My Virgin Diary’ is the first Indian movie to break all records of digital platforms