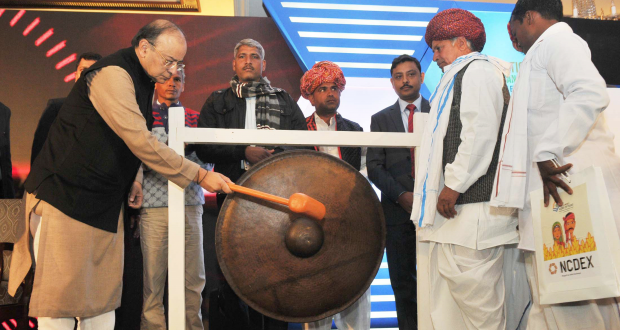 The Union Finance Minister, Shri Arun Jaitley said that India ranks among the fastest growing major economies in the world today. He said that since a large portion of our population is dependent on agriculture, it is important to have equitable growth. Shri Jaitley said that farmers have helped the country to overcome a long period of scarcities to reach the present era of abundance.

The Union Finance Minister, Shri Arun Jaitley was delivering the Inaugural Address after launching the country’s first agri-commodity options in Guar Seed in New Delhi today. He said that NCDEX Agri-options are an important tool which will contribute to the Prime Minister’s vision of doubling the farmers’ incomes by 2022. The Finance Minister said that the Guar seed is a major contributor to revenue generation, hence making it a suitable commodity to start with for Options. The Finance Minster congratulated the NCDEX for this initiative.

Speaking further on the occasion, the Finance Minister, Shri Jaitley said that this may appear to be a small step, but is a significant one, in the direction of agricultural trade as this will ensure that the farmers will receive a better price for their commodities.

National Commodity and Derivatives Exchange Limited (NCDEX) launched India’s first Agri-Options on guar seed futures in the presence of SEBI, WDRA, Industry Associations, Government Officials and FPO members. Farmers from various States across the country were present at the occasion to mark the commencement with a Live Trade by a farmer producer company.

Launched on the auspicious occasion of Makar Sankranti, this new hedging tool, Agri-Options:Ek Aur Kadam Kisan Pragati Ki Ore, is set to mark an important evolution in trading of agriculture commodities market. This instrument will give a strong impetus towards systematic development and transformation of commodity derivatives market in India, which will make the agri-economy more efficient and bring huge amount of value for the farmers of India.A Mandi.commobile application was also launched on the occasion, where farmers can learn more about agri-Options and the commodities market. Mandi.com is a pro bono half-an-hour ‘weekly show’ produced by NCDEX for National Public Service Broadcaster, DD Kisan Channel, a program dedicated to farmers’ education and awareness.