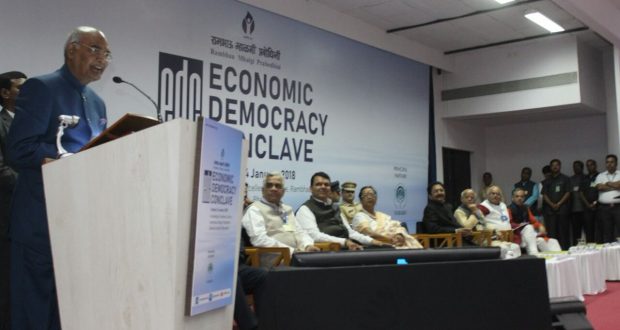 Speaking on the occasion, the President said that it is very important for our country and society to strengthen economic democracy through entrepreneurship. He praised the Prabodhini team for its contribution to strengthening the political, economic and social dimensions of our democracy for the past 35 years.

The President said that political democracy cannot be strong in the absence of economic and social democracy. Improvement in the economic condition of deprived sections is imperative.  Many initiatives have been taken in our country with the aim of ‘Sabka Sath, Sabka Vikas’ and ‘Sabka Samman, Sabka Utthan’. These have a singular goal of strengthening economic and social democracy. The idea behind these programmes is that if anyone has to really help someone, then he/she should be made financially self-reliant.

The President said that the promotion of an entrepreneurial culture in the country is not the sole responsibility of the Government. Family, educational institutions, private sector banks and entrepreneurs, NGOs, etc. all have the responsibility to create an environment where private enterprise is encouraged. Together, we should create a culture in which self-employment is not chosen just due to the compulsion of not getting a job. The idea of becoming ‘job-giver’ instead of ‘job-seeker’ should be embraced.

Later in the day, the President visited the Global Vipassana Pagoda in Mumbai.

Speaking on the occasion, the President said that in today’s world,  it has become important to spread the Buddha’s teachings. And Vipassana is one of those methods that can bring his message to the people. The President congratulated the Global Vipassana Foundation for its various social welfare initiatives.

2018-01-14
Editor in chief
Previous: “Indian Refining Industry will emerge stronger in the years to come”:Dharmendra Pradhan
Next: Central government is trying to choke the judiciary to ensure it ceased to function:Pinaki Mishra