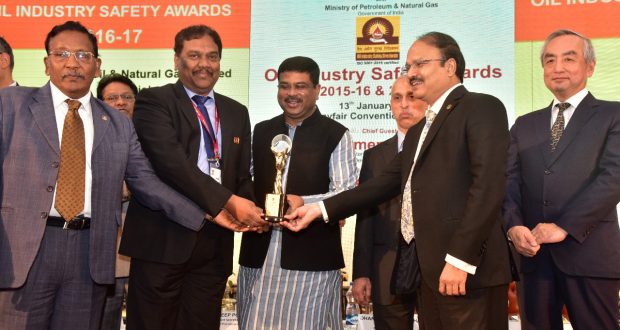 in National January 14, 2018 Comments Off on ONGC unit Rajahmundry Asset in Andhra Pradesh has been bestowed with Best Onshore Asset Award 752 Views

Rajahmundry:14/1/18; Continuing the tradition of excellence, the ONGC unit Rajahmundry Asset in Andhra Pradesh has been bestowed with Best Onshore Asset Award of Oil Industry Safety Directorate (OISD) today in Bhuvaneshwar by Minister for Petroleum and Natural Gas and Skill Development Dharmendra Pradhan.

ONGC Rajahmundry has been awarded as the Best Onshore Asset amongst all the oil and gas companies including private players in the country.

OISD is a regulatory body with Ministry of Petroleum and Natural Gas.

The award has been conferred on the Asset for accident free operations and losing no man hours. Earlier in this financial year, the Asset has received National Safety Award from Prseident of India for 2013.

Pradhan complimented the Award winners and said not to rest on laurels and exhorted the companies to work, according safety the top most priority.

Mr DMR Sekhar, attributed the success of the Rajahmundry Asset to the increased levels of Safety consciousness amongst the employees and top management’s zero tolerance to unsafe practices. Rajahmundry Asset has been consistently performing by adhering to the highest standards of Health, Safety and Environment.

Mr Sekhar further reiterated that Rajahmundry Asset is working in the new regime of HPHT adopting and adapting latest technology to exploit oil and gas from the tight reservoirs. It is putting in all efforts to realise the goal of- reducing the imports by 10 percent by 2022- set by Prime Minister.