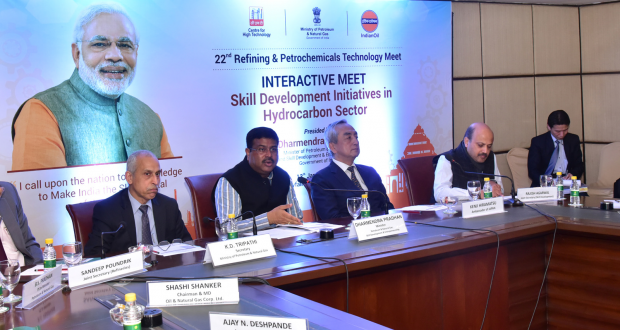 “Indian Refining Industry will emerge stronger in the years to come”:Dharmendra Pradhan

in National January 14, 2018 Comments Off on “Indian Refining Industry will emerge stronger in the years to come”:Dharmendra Pradhan 798 Views

Shri Pradhan, in his inaugural address expressed strong optimism about the Indian Refining industry going from strength to strength and achieving global excellence standards in the years to come, despite new and disruptive technologies on the horizon. He called upon the public and private sector oil and gas companies in the country to add at least 200 million tonnes of refining capacity in the next two decades in order to maintain India’s leadership position as the hub of Asian refining and product export. Integrated refinery – petrochemical complexes should be the future for deriving maximum benefits for the industry, he added. Underlining the critical importance of innovation and research & development, Shri Pradhan was of the view that these will be vital to achieve sustainable growth and providing clean, affordable energy to a large number of people. Shri Dharmendra Pradhan also expressed happiness at the Meet being organised in Odisha and said that this will give impetus to the state being developed as the Energy Gateway to Eastern India that has been described as ‘Purvoday- a Prosperous East for a New India’.

Union Minister Shri Pradhan also released the RPTM Compendium and “Report on Enhancing Refining Capacity by 2040” that gives a direction to the oil and gas industry to move forward. He also inaugurated the event exhibition and a poster display exhibition showcasing the advances being made in the refining & petrochemicals sector by Indian and foreign companies.

Delivering the key note address Shri K. D. Tripathi, Secretary, Ministry of Petroleum and Natural Gas, Govt. of India said that the petrochemicals sector in India was poised for a quantum jump in keeping with the rapid economic growth of the country and that there existed tremendous opportunities for India to emerge as the demand centre of energy. Low carbon, sustainable and affordable energy will be the demand for the future, he added.

Shri Sandeep Poundrik, Joint Secretary (Refineries), Ministry of Petroleum and Natural Gas, Govt. of India deliberated on the emerging trends in downstream hydrocarbon sector. He said that India is the third largest consumer of energy in the world and by the year 2035 we will consume almost 9% of the world’s energy. He also called upon Indian refining industry to focus on producing sustainable energy, reduce import dependence and leverage technology and innovation to keep a flexible, demand- centric product slate.

H.E. Mr. Kenji Hiramatsu, Ambassador of Japan, in his Special Address expressed his happiness at the strong ties between India and Japan and offered technological support to Indian industries. He expressed confidence that steered by the top leadership of the two countries, the bilateral ties between India and Japan will be taken forward in the field of energy cooperation as well, especially in the field of LNG.

Earlier, Shri Sanjiv Singh, Chairman, IndianOil in his welcome address appreciated the dynamic leadership offered by the Ministry of Petroleum & Natural Gas in steering the agenda of the energy sector with utmost dynamism, in keeping with the global aspirations of the industry and aiming for its dynamic growth in the times to come. He also expressed hope that the platform of RPTM will address important issue and challenges facing the industry.

The Refinery Performance Improvement Award is based on parameters like crude throughput, energy and water consumption and carbon emission intensity. The OGCF awards are decided on the efficiency of furnace / boiler and steam leak in the refineries. Innovation awards promote innovative scientific endeavour in the country by encouraging and rewarding excellence in original invention/ innovation and channelizing national and international knowledge and expertise with the mission of giving impetus to innovation activity in the country. (The list of award winners is attached).

The 22nd edition of Refining & Petrochemicals Technology Meet is being organised at Bhubaneswar, during January 13-15, 2018 to deliberate on recent technological developments in the downstream hydrocarbon sector. Chief executives of oil & gas companies, heads of refineries and global/Indian consultancy organisations, besides almost 1000 delegates from India and abroad are participating in this vital annual Meet that is being organised by the Centre for High Technology is co-hosted by IndianOil.