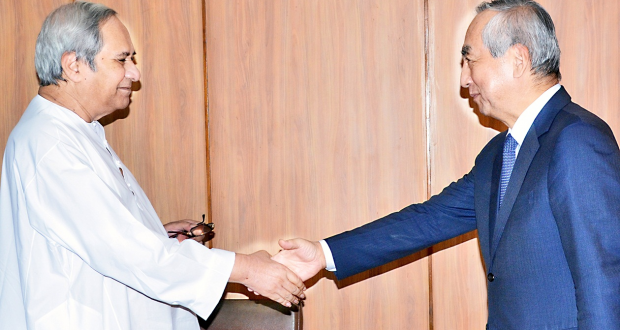 Bhubaneswar :13.01.18 The Odisha Government on Friday invited Japan to invest in the state in view of its Industrial friendly climate and policies.

The invitation was given by Chief Minister Naveen Patnaik during his meeting with Japan’s Ambassador to India Kenji Hiramatsu at the State Secretariat here.

Naveen also mentioned about the visit of a delegation from Odisha to Japan in October last year.

The CM said Japanese industries have many opportunities to invest in food processing, steel, petrochemicals, auto and electronic manufacturing sectors in the State.

He also invited Japan to participate in the ensuing Make-in-Odisha conclave 2018 as a partner country.

According to a release issued by the Chief Minister’s Office, the Japanese Ambassador praised the industrial climate in the State.

Hiramatsu also said the cooperation between Odisha and Japan would be further strengthened in cultural and educational exchange besides trade.