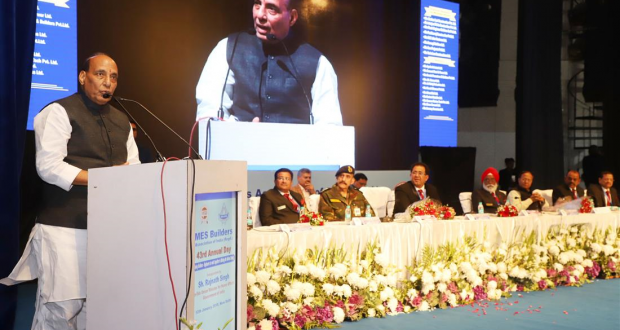 The Union Home Minister Shri Rajnath Singh has assured there will be no shortage of funds for Border Infrastructure. Inaugurating the 43rd Annual Day function of MES Builders Association of India, here today, he said the Government will expedite Forest and Environmental clearance issues which still continue to dog such strategic projects. Shri Rajnath Singh said the Prime Minister Shri Narendra Modi has also laid emphasis and relaxations will be obtained to facilitate completion of projects in national interest. He said the Private-Public Partnership (PPP) model will be crucial to create strategic infrastructure.

The Union Home Minister said the Government has embarked upon a five year ambitious project during the period 2017-2022 worth over seven lakh crore rupees to build road infrastructure. This includes more than 2,000 kms Border Roads. Pointing out that e-tendering process has led to transparency, Shri Rajnath Singh said quality delivery of the projects will be paramount. The Union Home Minister called upon the Armed Forces and the CAPFs for better coordination on the creation of Border Infrastructure.

The Union Home Minister said for the first time in India’s history, this Government has continued to roll out economic reforms even while the economic situation in the country has remained comfortable; normally the previous Governments were compelled on the path of reforms after landing in dire financial position.