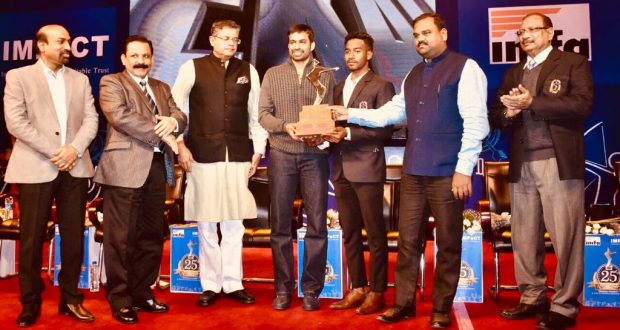 in National January 8, 2018 Comments Off on Indian hockey team defender Dipsan Tirkey was awarded with the 25th Ekalabya Puraskar 763 Views

Tirkey, who had recently for the Indian team in the Men’s Hockey World League held at Kalinga Stadium in the State capital, received a cash prize of Rs 5 lakh and a citation at the silver jubilee function of the award ceremony.

Athlete Amiya Mallick and hockey player Deep Grace Ekka were felicitated for their outstanding performance in 2017.

Amiya represented India in the 22nd Asian Athletics Championships held at the Kalinga Stadium while Deep Grace Ekka played for Team India at the Asia Cup where the team was crowned champion. In 2016, she was a part of the national team for Rio Olympics.

Notably, the Ekalabya Puraskar which was presented by IMPaCT, the social wing of IMFA was attended by Badminton maestro P Gopichand and Odisha’s Sports Minister Chandra Sarathi Behera.

2018-01-08
Editor in chief
Previous: Adani Foundation ‘Swachhagraha’ draws inspiration from ‘Satyagraha’ led by Mahatma Gandhi
Next: BJD and BJP traded barbs over firing at the house of Manoranjan Meher