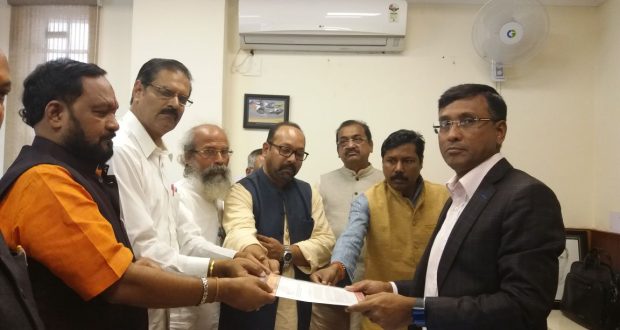 Bhubaneswar:8/1/18; BJD and BJP traded barbs over firing at the house of Manoranjan Meher, a worker of the saffron party, in Odisha’s Bijepur yesterday.

War of words erupted between the two political parties with BJP accusing the BJD of trying to frighten its workers, the conch party alleged that the BJP is politicising the matter.

BJP’s Odisha-in-charge Arun Singh, who is on a 2-day visit to the state, said that the BJD is trying to create a fear in the minds of people in the constituency by such activities.

“The popularity of BJD is decreasing due to lack of any significant achievement of the party. The party might have foreseen a defeat in Bijepur by-poll and also the 2019 assembly elections, which is almost evident. Fearing defeat, the BJD has resorted to violence,” said Singh.

However, the ruling BJD refuted Singh’s allegations and said the BJP is politicising the incident to gain political mileage as there is a by-poll in future.

“The incident is being politicised by BJP. Law is equal for all and it will take its own course,” said BJD spokesperson Pratap Deb.

On the other hand, a team of BJP leaders, led by party’s state president Basanta Panda, met Home Secretary Asit Tripathy today and apprised the matter.