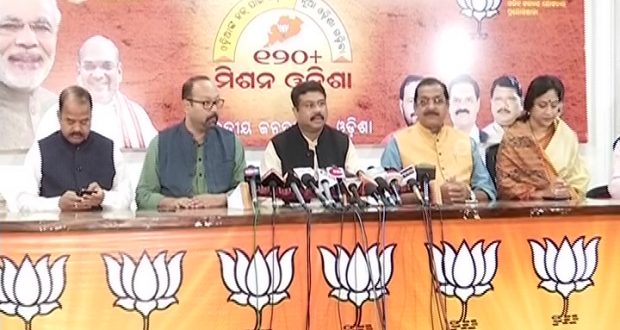 in National January 7, 2018 Comments Off on Dharmendra Pradhan launched a scathing attack on the Odisha government for not participating in the Niti Aayog meet 584 Views

Bhubaneswar:7/1/18; Union Minister Dharmendra Pradhan today launched a scathing attack on the Odisha government for not participating in the two-day meet convened by the Niti Aayog in New Delhi from January 4.

Opposing the Centre’s move to appoint Odisha Cadre IAS officers as Prabhari (in-charge) officers in eight most backward districts of Odisha – Kalahandi, Kandhamal, Gajapati, Rayagada, Malkangiri, Koraput, Dhenkanal and Bolangir – to address specific developmental needs, the State government had decided to give a miss to the event.

Accusing the ruling BJD of trying to politicise the matter, Pradhan, here at the party office on Sunday said the State government took the step without understanding the modus operandi behind the decision. Niti Aayog’s proposal should not be seen as an interference of the Centre into the business of the State, he clarified, adding the Chief Minister should prove he is the best administrator through actions and not just words.

Meanwhile, reacting to Pradhan’s allegations, BJD Spokesperson Pratap Deb said the State government has already appointed senior IAS officers for monitoring the developmental works in all the districts and hence there is no need to appoint more officers for the same job.

2018-01-07
Editor in chief
Previous: Inauguration of Tarapura Site Museum Dharmasala at Jajapur.
Next: BJB friends will exhibit great strength of willpower and fighting spirit for the interest the state:Naveen Patnaik

Term of office of M. Venkaiah Naidu, Vice-President of India, is ending on 10th August, 2022

Ban on identified Single Use Plastic Items from 1st July 2022