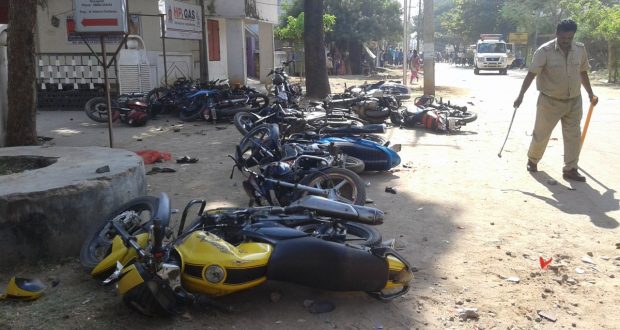 Rayagada:6/1/18; At least a dozen of persons were injured with four of them critically as unidentified masked miscreants attacked on the house of BJD MP N. Bhaskar Rao in Odisha’s Rayagada district headquarters township on Saturday afternoon.

Around 50 motorcycle-borne criminals brandishing  is sharp weapons barged into the Rao’s residence and LPG gas counter office located inside his office premises. Later they attacked the people indiscriminately.

The injured persons included BJD workers and employees of the Gas distribution centre, owned by Rao. Rao and his family members were in outstation when the incident took place.

The miscreants damaged nearly a dozen of bikes at the parking lot in front of the house. After perpetrating the crime, the armed miscreants swiftly fled from the spot while terrorizing the panicked people. By the time police arrived, they had managed to flee from the township area