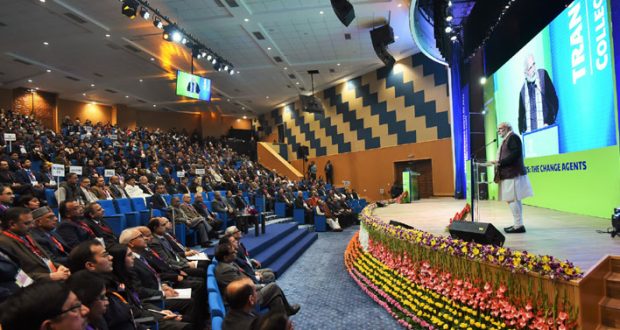 The Prime Minister, Shri Narendra Modi addressing the Conference on Transformation of Aspirational Districts, at the Dr. Ambedkar International Centre, in New Delhi on January 05, 2018.

in National January 5, 2018 Comments Off on PM interacts with Collectors of Aspirational Districts 824 Views

This event is in keeping with Prime Minister Narendra Modi’s vision of Transforming India by 2022. The Union Government has embarked upon a major policy initiative for the rapid transformation of 115 districts that are lagging on specific development parameters.

Six groups of officers made presentations on the themes of nutrition, education, basic infrastructure, agriculture and water resources, eradication of Left Wing Extremism and financial inclusion and skill development.

Addressing the gathering, which also included many Union Ministers and senior Union Government officers, the Prime Minister said this is the first official programme at the Dr. Ambedkar International Centre, and therefore has a special significance.

He said that relative backwardness of some regions is an injustice to the people of those regions. In that context, he added, this effort to develop 115 backward districts, is in keeping with the vision of Dr. Ambedkar, who worked for the upliftment of the under-privileged.

Giving the examples of the Jan Dhan Yojana, the construction of toilets, and rural electrification, the Prime Minister said nothing is impossible in our country if we have a firm resolve. He also gave examples of success that is being achieved in entirely new initiatives such as soil testing.

He emphasized that there is limitless potential, limitless possibilities, and limitless opportunities now in India. In this context, he mentioned the improvement in ease of doing business. He credited officials of the Government – and Team India – for this success.

The Prime Minister said that top-down solutions do not yield results. Therefore, the effort is that people on the field contribute to solutions. In this context, he appreciated the clarity of thought, and faith in conviction, in the presentations today.

The Prime Minister said that regional imbalances should not be allowed to increase indefinitely. Therefore, the development of backward districts is imperative. He said that success stories are vital to change the negative psyche and mindset in these areas. The first step is to convert this mindset of pessimism into one of optimism, he explained.

The Prime Minister said that public movements for development require a meeting of minds in the core team. In this context he suggested brainstorming at the district level. There need to be systematic arrangements to involve people, he said, giving the example of the Swachh Bharat Abhiyan. He emphasized the importance of building positive narratives and optimism in the achievement of development targets.

We need to recognise and channelize the aspirations of the people of the aspirational districts, the Prime Minister said. He said public participation should lead to a matching of the aspirations of people, with schemes of Governments. He said the Collectors of the 115 aspirational districts have the opportunity to earn lasting satisfaction, by delivering on development objectives. He said challenges are the path to achieving success in life, and these Collectors have the opportunity for that. He called for a concerted effort to achieve visible results in three months, till Babasaheb Ambedkar’s birth anniversary on April 14th. He said he wishes to personally visit one such well-performing district in the month of April. He said these 115 districts can become the foundation for developing New India.