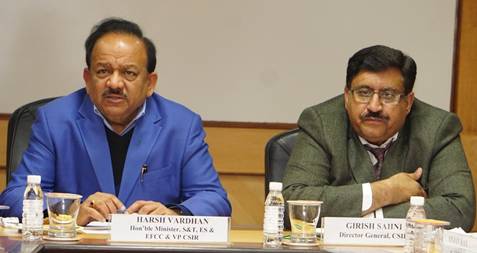 Newdelhi:5/1/18;Union Minister for Science & Technology, Earth Sciences and Environment, Forest & Climate Change, EFCC and Vice President, CSIR, Dr. Harsh Vardhan, has called for a more favorable approach in addressing the issues of pollution due to firecrackers, as well as protecting jobs and businesses in the existing value chain of firecrackers, through the power of science.   Addressing a brainstorming meeting on non-polluting firecrackers held at Council of Scientific & Industrial Research (CSIR) here today, Dr. Harsh Vardhan emphasised that all S&T organizations should come together to address this issue and that CSIR is uniquely positioned to provide amenable solution to this menacing problem. He urged scientists to put their heart and soul into this endeavor and give a new Diwali to the children of the country, which could be remembered in history as “CSIR’s Diwali”. The Minister highlighted the background issues on the matter called for focused R&D efforts on non-polluting firecrackers/fireworks. He also said that he strongly believes that science has an answer to this problem.

Appreciating the efforts of CSIR towards the development of eco-friendly crackers, Dr. Harsh Vardhan also called for comprehensive measures such as development of suitable masks to address the overall issues of pollution. He stressed the need for simultaneous action on product development, regulatory approvals and supply chain aspects.

DG, CSIR, Dr. Girish Sahni, pointed out that CSIR is committed to national priorities and towards this important societal cause. “Several CSIR laboratories have come together and are putting together a robust S&T strategy for development of eco-friendly firecrackers and fireworks”, he said. Dr. Sahni stated that the first phase will cover reduction of pollutants, while future strategies will cover removal of pollutants from the compositions.

An inter-ministerial/departmental Expert Committee has been constituted by the CSIR to guide and mentor CSIR laboratories in this unique R&D endeavour.  Taking the R&D ideas forward, CSIR also proposes to meet the manufacturers of firecrackers in the country to involve the concerned stakeholders in its larger action plan.  Each of the members appreciated the CSIR initiative and voiced their strong support to make this endeavour a great success.

There have been widespread reports and observations of rising levels of pollution due to firecrackers/fireworks, especially during the festival time of Diwali. There have been reports of lung related disorders and upper respiratory diseases due to the high levels of pollution. One of the stringent measures recently adopted in Delhi/NCR was to ban the sale of firecrackers during the festival period by the Hon’ble Court.

CSIR Directors, Dr. Rakesh Kumar, CSIR-NEERI and Prof. Santanu Chaudhury, CSIR-CEERI gave an overview of the strategy and action plan that CSIR has put together to address the directives of Hon’ble Minister. The Directors elaborated on potential measures to curb pollution, which   included preventive and post combustion measures. The viable propositions will also pay due attention to the light & visuals as well as sound factors of the newly proposed compositions. E-crackers and chemical-hybrid systems are the other options proposed for pursuit.

The Council of Scientific & Industrial Research (CSIR), known for its cutting edge R&D knowledgebase in diverse S&T areas, is a contemporary R&D organization. Having a pan-India presence, CSIR has a dynamic network of 38 national laboratories, 39 outreach centres, and 5 units. CSIR pursues wide range of R&D activities in various S&T domains

2018-01-05
Editor in chief
Previous: PM interacts with Collectors of Aspirational Districts
Next: New Rs. 10 Currency Notes Introduced have motif of the Sun Temple and the Konark on the reverse side