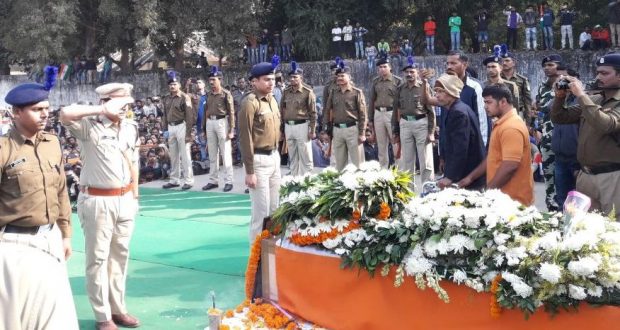 in District Diary January 3, 2018 Comments Off on Martyred Odia CRPF jawan Pradeep Kumar Panda was given guard of honour 1,123 Views

CRPF DIG, Sundargarh Collector and SP also paid their homage to the martyr.

Pradeep’s dead body was taken to the Rajgangpur Stadium in the morning amidst a sea of people who thronged Rajgangpur from all parts of the state to pay homage to the brave soldier. While CRPF personnel gave a guard of honour and gun salute to the martyr, people were seen making a beeline to enter the stadium to take a last glimpse of Pradeep. 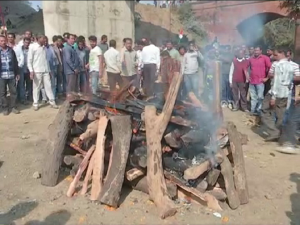 The body was later taken to the martyr’s native place, where the final rites will be conducted. It was yesterday brought to Biju Patnaik International Airport (BPIA) in Bhubaneswar from New Delhi. The martyr was also given a guard of honour by CRPF personnel at the airport.

Pradeep shed his life for nation’s sake on December 31 after a group of Pakistan-based Jaish-e-Muhammad terrorists raided the camp of 132 battalion of CRPF located at Lathpora very late in the night. They attacked the camp with grenades and resorted to indiscriminate firing from automatic rifles. Pradeep along with four other jawans struck bullet injuries while fighting with the ultras and died subsequently