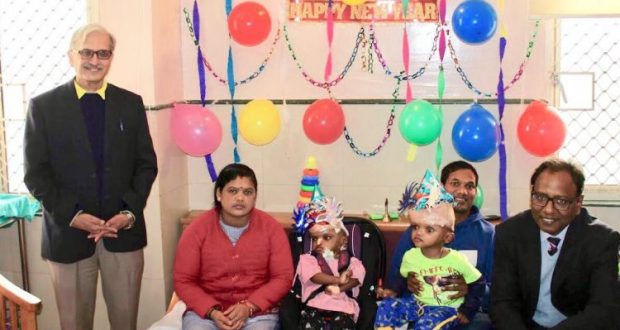 in National January 1, 2018 Comments Off on Jaga and Kalia celebrated the New Year with their parents and Doctors at AIIMS 884 Views

The pictures of their celebration released by the hospital authorities showed Jaga sitting on his father’s lap while his brother Kalia was seen beside his mother. Neurosurgeon Ashok Mohapatra and another senior doctor of the surgery team were present to celebrate the New Year with the twin brothers.

Hospital sources said Jaga’s condition is improving beyond expectation while Kalia is showing signs of considerable improvement. Both the children will remain under medical observation for three more months, AIIMS authorities had recently announced.

The twins were separated by a team of doctors at the premier health institute of the country after an 11-hour-long surgery on October 25, 2017. Odisha government has extended all financial support for the treatment of the twins.

2018-01-01
Editor in chief
Previous: Odisha government suspended operations in seven mines that failed to pay penalties
Next: Under the leadership of Chief Minister Naveen Patnaik, Odisha is leading the race of Development