Bhubaneswar: 6/11/17;Despite policemen on duty at the site, five activists of Navnirman Yuva Chhatra Sangathan (NYCS), the student front of Navnirman Krushak Sangathan (NKS) today managed to barge in into the official quarters of Agriculture Minister Damodar Rout here.

NYCS activists, who had gheraoed the official quarters of Rout and were staging a demonstration demanding immediate action from Rout’s end to stop farmers from committing suicide, suddenly barged in into the Minister’s official quarters through the main gate taking the policemen on duty unawares. Apart from demanding measures to contain suicides by farmers in the state, the activists further demanded amendment of the Odisha Relief Code and immediate implementation of the law on sharecroppers rights.

Slogan-shouting activists demanded Rout’s ouster and his arrest as well.

Police have arrested the five activists and one Sub Inspector of Capital Police Station Jambeswar Muduli has been suspended for dereliction of duty leading to breach in security, reports said. 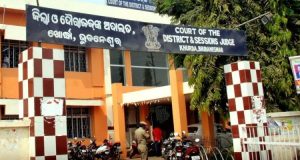