The theme of Exercise INDRA-2017 was ‘Preparation and Conduct of Operations by a Joint Force for Suppression of International Terror Activity at the request of a host country under UN mandate’.

More than 900 soldiers, sailors and air warriors from the Indian Army, Navy and Air Force participated in the exercise along with over 1000 personnel from the Russian Defence Forces.       The exercise was conducted in the Sergeevsky Combined Arms Training Range, Cape Klerk Training Area and the waters of the Sea of Japan.

It was indeed a historic occasion for two of the world’s greatest Armed Forces to join hands and successfully conduct an exercise of this magnitude with professionalism, providing an opportunity for both defence forces to imbibe the best practices from each other and jointly evolve and practice drills to defeat the scourge of terror.  The first ever Indo-Russia Joint Tri Services Exercise has been a combination of training and cross training in field conditions on land, sea and air, to achieve seamless integration.  The validation of the exercise tasks is a testimony of the contingents of both countries having integrated and synergised seamlessly to achieve the laid down objectives.  The exercise also provided an opportunity to all personnel for cultural exchange and for friendly sports competitions.

Exercise INDRA-2017 will surely be a benchmark for future exercises of this nature all across the world.  The espirit de corps and goodwill generated during the exercise will facilitate further strengthening of bonds between the defence forces of India and Russia enabling them to understand each other’s organisations and the methodology of executing joint counter terrorist operations.  It is even more satisfying that this milestone in Indo-Russia defence cooperation has been realised as we commemorate 70 years of Indo-Russian friendship.

2017-11-01
Editor in chief
Previous: President of India inaugurated the Global Clubfoot Conference
Next: Odisha government has sent a penalty notice of Rs 20,169 crore to Mahanadi Coalfields 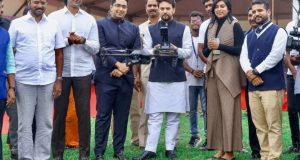