Today’s inauguration of the state of the art aviation infrastructure is a part of on-going effort by the Indian Coast to strengthen the maritime and coastal security.

The Coast Guard Air Enclave, Bhubaneswar has been actively involved in undertaking Air surveillances along the Odisha and West Bengal Coast. The unit is under the operational control of Commander Coast Guard Region (North East) who excesses command and control through Coast Guard state Headquarters at Odisha and West Bengal with area of responsibility of over 1.5 lakh square KM of Indian Exclusive Economic Zone in the Bay of Bengal.

The inauguration of aviation infrastructure at Bhubaneswar has provided an upward fillip towards Coast Guard futuristic expansion plan for its Air Arm. The aircraft based at Bhubaneswar has been actively involved in undertaking maritime reconnaissance towards maintaining Safety & Security, sensitive maritime environment and Search and Rescue mission. The ICG air assets at Bhubaneswar will swiftly respond to the Maritime contingencies at extended ranges ensuring the safety and security off the coast of Odisha.

The Coast Guard Air Enclave at Bhubaneswar is being commanded by Commandant AC Dandekar, TM and the unit has a compliment of 16 officers and 81 men, said coast guard officials,

Tags: Coast Guard Aviation Infrastructure In Odisha
2017-09-01
Editor in chief
Previous: Odisha tops the list in implementation of the Forest Rights Act
Next: BDA should add the fourth T called transformation to its book :Niranjan Pujari 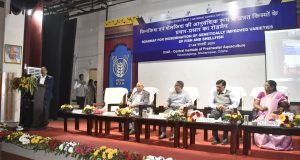