The bandh, called by the Nagarika Committee, was supported by local lawyers’ association and other civil society groups.

While shops, business establishments, government and private institutions remained closed due to the bandh, vehicular movement came to a grinding halt, reports said.

On the other hand, the medicos have launched cease-work agitation affecting health services at the hospital badly.

A discussion between the students and the director couldn’t take place today as they opposed his arrival at the agitation spot and shouted slogans.

“I was trying for a peaceful resolution of the matter. Discussions can’t take place if they don’t maintain calmness,” said Pujahari.

The medical students’ association of SCB Medical College and Hospital in Cuttack has extended its support to the agitation. Junior doctors of the hospital today wore black badges demanding withdrawal of case against VIMSAR medicos besides an impartial probe into the incident.

Meanwhile, a fresh controversy today emerged amid the row as several posters with lewd remarks against the PG and nursing students were found near ladies hostel of VIMSAR.

The nursing association has filed an FIR in this regard demanding arrest of those behind putting the posters.

Notably, several PG students had on Friday night allegedly pelted stones at the residence of Pujahari, who had recently cracked a whip on the doctors of the hospital who were reportedly treating patients at several private clinics during their duty hours.

2017-07-31
Editor in chief
Previous: Odisha Government clamped prohibition on employees to participate in dharnas or strikes under the ESMA
Next: ATGroup Chief Pradeep Sethy and two other directors of the Ponzi firm sentenced seven years jail 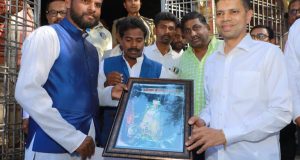