Separate Department of Disability Affairs to be set up by States

Newdelhi:119/5/17;Shri Thaawar Chand Gehlot, Minister for Social Justice & Empowerment while addressing the “15thNational Review Meeting of State Commissioners for Persons with Disabilities on Implementation of Act-1995” stressed for the need that States should create/setup separate Department of Disability Affairs with appointment of full time Independent State Commissioner in accordance with provisions of PwD Act, 1995 for effective implementation of the Act as well as welfare Programmes & Schemes of Education, Training, Skill Development and rehabilitation of the Disabled (Divyangjan) in the society.

He chaired the opening session of the 2-day long National Review Meeting, which was attended by 11 States Commissioners and 15 representatives of the State Commissioners/State Government and representatives from Central Ministries and National Bodies under Ministry of Social Welfare.  He stated that there is great need for empowering and strengthening the Divyangjan in the Country by safeguarding their rights and privileges entrusted by the Act.  The Ministry of Social Justice & Empowerment has become an important & prominent among all Ministries of the Central Government for making all round efforts for better education, vocational training & rehabilitation of the Divyangjan in society so that could lead a respectable life.h. N. S. Kang, Secretary, DEPwD in his speech stated that the States should consider to create/set up separate Department of Disability Affaire in their respective states and the State Commissioner should act as watchdog for effective implementation of Act, Programmes and Policies for Welfare of Divyangjan in StateDr. Kamlesh Kumar Pandey, Chief Commissioner for PwDs in his address stated that State Commissioners should review the implementation of the Act at State and District level vigoursly. They should organise Mobile Courts and conduct reviews at Districts. On this occasion the State Commissioners and Central Government Ministries made Power Point Presentations showing various measures being taken by their respective states/ministreis for effective implementation of the PwD Act, Programmes and Policies of Govt. of India for welfare of Divyangs.  The Prominent Ministries were Panchayati Raj, Deptt. Of Personnel & Training, Deptt. of Revenue and Deptt. of Financial Services.  The State Commissioners from J&K, North East States, Union Territories, Himanchal, Andhra Pradesh, Chhatisgarh also made presentations before the Minister 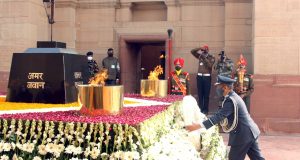 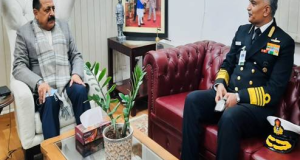