Suman Talwar, the Telgu actor who had played negative role in Akshay Kumar starrer ‘Gabbar is back’, has also playing important role in this film.

This Movie is under the banner of S.V Arts and Ram Priyanka Entertainments. The film is Produced by E.Sheshagiri and M.Pitchi Reddy, Directed by G.N.S. Prasad and Music Director Kishan Kawadia.

This movie will be released in two languages Odia and Telgu. ” Sitarama Kalyanam Chustamu Rarandi” is the title of Telgu version.It is the second Telugu film of Sabyasachi’s after Neerajanam.The film scheduled c to be released across the state on Friday 31st,March,2017

2017-03-27
Editor in chief
Previous: Odisha government has planned to to make the state beggar free.
Next: 730 million Internet users are anticipated in the country by 2020-NASSCOM. 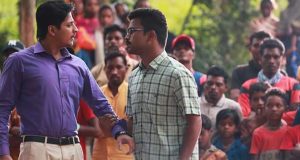