For the last five centuries or so, Shrimad Bhagabata, better known as Atibadi Jagannath Das’s ‘Bhagabata’ has been the ultimate in religio-literary experience of the Odias. It has been the most popular Odia text all these years. Needless to say, it still enjoys that elevated position in the Odia psyche despite all the social, cultural and political changes over the years. It is not a mere religious text, a purana of yore satisfying the spiritual quest of semi-literate readers assuring them an easy way of attaining salvation; it has rather become the very essence of Odia culture and identity and the Odia way of life. It is the epitome of the Odia metaphysical quest, spelling out the philosophical moorings of the Odia people, and above all, teaching the Odias the meaning of life and the way of living as human beings.

My first acquaintance with the Bhagabata was when I was a school student. As we all know, every Odia household possesses a set of the Bhagabata along with several other scriptures. My grandmother had the daily habit of reading and reciting the Odia puranas and mahakavyas and very often there were sessions of recitation attended by elderly women of our village. My father, who was fondly called Pandit, had a good knowledge of the puranas and mahakavyas and it is the influence of the elders in the family which made me interested in the Bhagabata and the other classical texts. Sometimes I would be asked to recite the Bhagabata to the assembled women and I was proud of doing a service to the people I loved. Incidentally, I had read almost all the Odia puranas and kavyas before I had finished my high school education.

I have no hesitation in admitting here that young as I was then, it was not possible on my part to ‘understand’ the Bhagabata. Not that I understand it now. But then I enjoyed the lyrical quality of the text and the various episodes narrating interesting stories. When I grew up, and the scope of my reading became broader, I always thought of going back to the Bhagabata. But I wanted to read as much as I could, in many languages – English, Sanskrit, Hindi and Bengali – whatever I could lay my hands upon. Most of the books I read were from my father’s library and often on his advice. I had a lot of time after my High School examination and I went through the Upanishads in Hindi commentary. I don’t know why, but it is then that I was reminded of the Bhagabata. I would come back to it every now and then despite my preoccupation with the world of books. After I became a Lecturer in English, I went back to the Bhagabata again, and it is then that the idea of translating it in English came to my mind (or heart?). I was deeply obsessed with the idea and I even wanted to go on leave so that I could translate the Bhagabata in English. Then I became a realsansari. I devoted more time to writing in Odia and later to my research work in Indian English Literature. In the process, my project of translating the Bhagabata was almost forgotten till the late 1980s when fate again brought back the ancient wish of mine to the fore.

In the late 1980s, while I was in Puri, Atibadi Jagannath Das returned to my psyche and life quite miraculously. Srikshetra Lekhak Sammukhya of Puri — some of the office bearers of which were my former students — wanted to do something on Atibadi. We had found out that the year of Atibadi’s birth was 1591 and we should organise functions and activities to commemorate the 500th year of the great saint-poet’s birth. I suggested that we should do an anthology of critical essays on Atibadi’s Bhagabata in English because we have nothing on him in English to present him to the world readership. The enthusiastic office bearers accepted the idea and thus I started working on the now well-known book, Atibadi Jagannath Das: A Quin-Centennial Tribute. The book was launched in 1993 and received unprecedented popularity. While working on the book I went through the Bhgabata again and it unveiled new interpretations to my grown-up mind. In the process, we revived the Odia people’s interest in the great saint-poet. I am glad to say that now 1591 has been universally accepted as the year of Atibadi’s birth.

It is during that time that the latent dream of translating the Bhagabata in English resurfaced. But I could not do anything in that direction for a long time. Although my preoccupation with many other things, mostly academic research, did not give me the time or the scope to pursue my dream project, I had already started working on it. I read the Bhagabata once again with the eye of a translator, and found its English translation an extremely difficult proposition. I went through commentaries and supporting scholarly works (such as the six-volume commentary of Vyasa’s Shrimad Bhagabata Mahapuranam by Sushil Kumar Das, Bhubaneswar: Orissa Sahitya Akademi, 1988). I even sought the advice of learned people on specific problem lines, terms/words and ideas. I found that a uniform interpretation was not coming forth.

Like all great classics, the Bhagabata is also difficult to translate. Written in the early sixteenth century, it is the earliest specimen of a literary endeavour arguably with an agenda of standardising the language in the context of the dominant Sanskrit hegemony. Secondly, it codifies the metaphysical discourses exclusively Odia in essence (such as the Pinda-Brahmanda theory and Jnanamishra Bhakti of the Utkaliya Vaishnabism). Thirdly, being an exquisite transcreation of the Srimad Bhagabata Mahapuranam of Vyasa, it involves extremely complex strategies of re-creation, by faithfully emulating the original text in content and spirit, but devising imaginative ways and means to Odianise the form and the content, and by dexterous narrative strategies.

The most challenging aspect in the Odia text is the poetic diction that calls for innovative strategies to negotiate the words and expressions, nearly untranslatable, owing to the mystical, cultural and mythical associations. Another front, which demands a departure from the original, is its form and prosody. Thenavakshari or nine-syllable metre in the Gurjari Brutta cannot be transferred in English because of many reasons. The most obvious one is that like Odia, an English syllable is not always a matra. Thus, a rendering of the original line of nine syllables in English rendering may require many more syllables, and each line may be metrically different from the other. One could make use of iambic pentameter, most popular in literary compositions of high seriousness (viz. Milton’s Paradise Lost), but the sublime discourse and soft lyricism of the Bhagabata may be lost in its grandeur. Besides, it will not be convenient to try to retain the musicality of the original text in English translation as it might affect the transference of the bhava or the content of the original Odia text.

Dr Subhendu Mund is a well-known Odia poet, critic, translator and lexicographer.He retired as the Principal, BJB Autonomous College, Bhubaneswar and is currently a Visiting Professor at IIT Bhubaneswar.He has published twenty books in Odia and his poems and stories have been translated into a number of Indian languages. They are also included in representative anthologies. 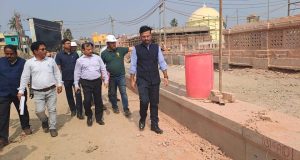