Centre for Science and Environment (CSE) has welcomed the initiative by the Arvind Kejriwal government in Delhi to announce emergency measures for bringing down the super severe pollution peaks that have persisted for about a week, posing serious health risk for children, the ailing and the general public.
Said Anumita Roychowdhury, CSE’s executive director (research and advocacy) and the head of its air pollution control and sustainable mobility programmes: “This emergency situation demands emergency action. These measures will now require stringent enforcement. However, vehicle restraint measures including odd and even and parking restraints must also be included immediately for effective impacts.”
The emergency measures announced by chief minister Kejriwal today include
However, restraints on vehicle numbers with the odd and even scheme and parking restraints must also be implemented simultaneously. Specifically, point out CSE researchers, diesel vehicles including diesel trucks and cars should be controlled. Vehicles contribute hugely toxic emissions very close to where people are, thus exposing them to very high toxic risk when pollution remains trapped close to the ground level. Along with vehicle restraint measures, the government needs to scale up and intensify the public transport system.
Globally, emergency action kicks in the moment pollution hits the worst air quality level according to the National Air Quality Index and persists at least for three consecutive days. This is done to immediately reduce peak levels to protect children, those suffering from heart and respiratory problems, and also the general public.
In Delhi, there has been no respite from the choking haze of pollution since Diwali. Analysis of air pollution data from the Delhi Pollution Control Committee shows that on Diwali day (October 30) the  air was already saturated – the 24-hour average level of PM2.5 was 347 microgramme per cubic metre (cu m) and was at ‘severe’ level which is the worst category according to the air quality index.
This further increased significantly post-Diwali when on November 2 the 24-hour average levels  shot up to 577 microgramme per cu m. Yesterday – almost a week later — it was far worse at 639 microgramme per cu m.
The peak levels were even more horrendous and not breathable. On November 5, the four hour averages (12 noon – 4 pm) of peak levels were as high as 732 microgramme per cu m in Punjabi Bagh, 762 microgramme per cu m in Mandir Marg and 566 microgramme per cu m in R K Puram.
Said Roychowdhury: “Delhi has become a gas chamber. It may recalled that the infamous London smog that had killed 4,000 people within a week during the December of 1952, had an average particulate level of about 500 microgrameme per cu m mixed with high levels of sulphur dioxide.”
Step forward
In Delhi, there is no room for more pollution. Act swiftly, effectively and urgently to protect public health.
2016-11-16
Odisha News Times
Previous: Singer Swati Sharrma with her Emotion trance
Next: Mo Dil Kahe Ilu Ilu 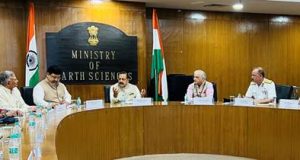