Gopinath Mohanty is the most important Odia Novelist after Fakir Mohan Senapati. His novels Paraja, Amrutara Santana, Danapani, Laya Bilaya and MatiMatala are major odia novels and make him an outstanding novelist in post-independence Indian literature. Paraja, Danapani and Laya Bilaya have already been published in English translation. The first major novel Paraja was published in 1945, named after the tribe of the same name. Paraja translated by Bikram Das was published by Oxford University Press after initial hesitation. They have just brought out its 14th impression and collaborated with faber and faber who, I understand, have published its sixth impression. Two years later was published Amrutara Santana the first novel to receive the Sahitya Akademi award in 1955. Incidentally Sahitya Akademi is now celebrating its 60th year and going to publish this work. Amrutara Santana is an epic, which celebrates the anguish, the ecstasy, the joys and tragedies of the Dongaria Kondh tribal world. Dongaria Kondhs are numerically the largest among the Odishan tribes and one of the most primitive. Both Paraja and Amrutara Santana use lot of ethnographic details but the author’s competent craftsmanship does not allow them to intrude the main flow of the novels. Danapani is the story set in an urban milieu. It is the tale of an indefatigable social climber, Balidatta. Laya Bilaya is the story of a family of three from Kolkata spending a week at Puri. Mati Matala published in 1964 is a novel of epic dimensions on Odia village. It runs into nearly thousand pages and is one of the longest novels written in Odia. It received the Bharatiya Jnanpith Award in 1974.

In 1948 immediately after Amrutara Santana he published Harijan which is a rare work and only one of its kind. If he has three novels on tribals this one was on the neglected scheduled caste people who, those days, carried night soil on their heads. In 1952 he published the novel Rahura Chhaya perhaps the only novel in which he explored the dark levels of human consciousness. After MatiMatala Sri Mohanty wrote six other novels: Analanala (1973),Diga Dihudi (1979), Bundaye Pani (1988), Kichhi Kahibaku Chhahen (1989), Janakamma (1989) and Meria (1989). The last three novels which are very small both in size and scope were published two years prior to his death. Anama (1993) was published two years after his death. The major works of fiction of Sri Mohanty began with Paraja in 1945 and ended with MatiMatala in 1964. All his other novels can be seen as footnotes to them and as minor streams flowing into the massive river constituted by the five novels which I have mentioned in the beginning.

His towering figure as a novelist has over-shadowed his achievements in the field of short stories which are invaluable assets of Odia literature. He has written around 200 short stories. His first two short story collections Ghasara Phula(Flowers of Grass) and Poda Kapala(Burnt-out Destiny) were published in 1951. Satapancha (Hesitations) his tenth and last anthology during his life-time was published in 1989. After his death in 1991, four anthologies of his short stories have been published. They are Shara Sajya (Bed of Arrows), Chhai Alua (Shadow and Light), Tinikala (Three Ages) and Baghei (The Season of the Tiger). These four contain a larger 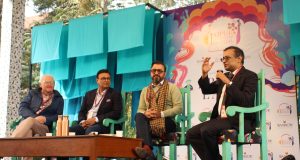